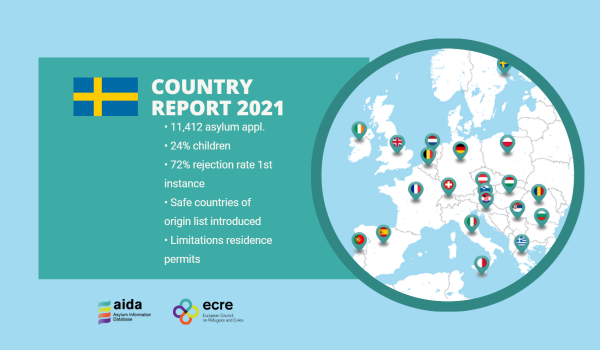 The updated AIDA Country Report on Sweden provides a detailed overview on legislative and practice-related developments in asylum procedures, reception conditions, detention of asylum seekers and content of international protection in 2021.

Throughout 2021, 11,412 people presented an asylum application in the country. 24% of asylum applicants were children. The most represented nationalities among asylum applicants being Afghan, Syrian and Iraqi. The overall recognition rate at first instance was significantly low, as a form of protection was granted in only 28% of cases. In May 2021, Sweden implemented the APD´s provision regarding safe countries of origin in its national legislation and a list of safe countries of origin was developed, giving the Swedish Migration Agency increased possibilities to use accelerated procedures for asylum seekers from countries on the list.

As a result of the developments in Afghanistan, the Swedish Migration Agency decided on 16 July 2021 to halt all deportations to Afghanistan and on 23 July 2021 to suspend decision-making in general in asylum cases concerning Afghans. On 30 September 2021, new guidance was adopted by the Migration Agency essentially allowing for re-examination of previously rejected Afghan cases with enforceable expulsion orders. 1,500 Afghans were resettled to Sweden, many of whom were evacuated from Afghanistan in a special evacuation operation performed by the Migration Agency and other Swedish Agencies. Following the decision by the SMA to temporarily stop all deportations to Afghanistan after the Taliban take-over of the country, many Afghans with enforceable expulsion decisions were able to apply for individual decisions to temporarily halt their expulsions, and subsequently to reavail themselves of financial support and accommodation. However, this resulted in a situation where many of these individuals could not regain such support, including Afghans who had submitted subsequent applications but were not yet granted a re-examination, Afghans whose applications for extending residence permits for upper-secondary education or work had been rejected, Dublin returnees, and others who simply lacked information on how to apply.

For what concerned detention conditions, two precedent rulings were made by the Migration Court of Appeal regarding the national rules on detention and the application of the Reception Conditions Directive. In the first case, the Migration Court of Appeal found that Article 8(3)(d) of the Reception Conditions Directive does not allow the detention of asylum seekers under the Aliens Act when they are not detained as part of a return procedure covered by the Return Directive at the time of the detention decision. In the second case, the Migration Court of Appeal found that there were grounds to detain a person who had been granted a re-examination of his right to a residence permit based on protection grounds following a subsequent application. Since the Reception Conditions Directive was applicable, the Court expressed that the detention had to be in accordance with the Directive.

The law governing temporary limitations on the possibility of being granted a residence permit in Sweden, which was introduced in 2016, ceased on 19 July 2020. However, several restrictions introduced through the Temporary Law were made permanent through changes to the Aliens Act, including a shift to temporary residence permits for beneficiaries of international protection, requirements regarding qualification time, ability to provide for oneself and good conduct as requisites for being eligible for permanent residence permits, limitations regarding family reunification and requirements regarding income and housing for family reunification.