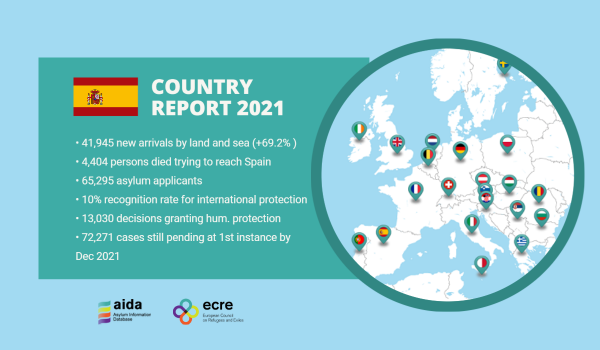 The updated AIDA Country Report on Spain provides a detailed overview on legislative and practice-related developments in asylum procedures, reception conditions, detention of asylum seekers and content of international protection in 2021.

According to national authorities, a total of 41,945 persons arrived in Spain in 2021, most of them by sea. Out of the total number of persons arriving by sea, more than a half (22,316 persons) disembarked on the Canary Islands, which has been a main destination since the last months of 2019, while 17,341 persons arrived on the mainland and the Balearic Islands. Only a few disembarked in Ceuta and Melilla. 4,404 persons reportedly died trying to reach Spanish shores throughout the year.

Pushback practices continued to be reported, primarily in relation to land arrivals to the enclaves of Ceuta and Melilla. In mid-May 2021, around 8,000 migrants reached the city of Ceuta by sea, some swimming for around 36 hours – one man dying in the attempt. 4,000 of the people arriving were immediately expelled upon arrival. Among them were more than 2,000 unaccompanied minors. In August, the Ministry of Interior announced having started return procedures for a part of them, as the result of an agreement with Morocco on the transfer of around 700 unaccompanied children to a reception facility in the Moroccan city of Tetuan. n February 2022, a judge in Ceuta ordered the Minister of Interior to return to Spain 14 children that were illegally deported to the country.

A total of 65,295 persons applied for asylum in 2021, with 72,271 cases still pending at first instance at the end of the year. Venezuela, Colombia, Morocco, Mali and Senegal were the main countries of origin of asylum applicants. The recognition rate remained relatively low, with international protection granted in only around 10% of the cases. It should be observed, however, that the overall recognition rate reaches almost 29% if decisions granting humanitarian protection are also taken into account.

Shortcomings in the reception system are a chronical issue in the country, and were reported also throughout 2021. Many facilities remained overcrowded, and the lack of transfers from the islands and the enclaves to the mainland resulted in numerous cases of destitution and homelessness among persons seeking asylum. Several reports also pointed to the obstacles that third-country nationals (i.e. including migrants, asylum seekers and beneficiaries of international protection) face in accessing housing and renting apartments, and brought to light systematic problems in the real estate-sector.

The Spanish Ombudsman expressed concern over the conditions at facilities where migrants are deprived of liberty. At the Centres for Temporary Attention for Foreigners (Centros de Atención Temporal de Extranjeros, CATE) deficiencies related to overcrowding, the presence of mothers with children and of ill people, and insufficient guarantees to access asylum. Concerning CIEs, recommendations recurring in several centres relate to the availability of medical care, interpretation, legal and social assistance, possibility to communicate with lawyers, access by NGOs, video surveillance and the registration of the use of coercive measures. A specific issue reported was the detention of vulnerable asylum seekers; in breach of national law, several cases came to light in which unaccompanied children and victims of trafficking were detained.