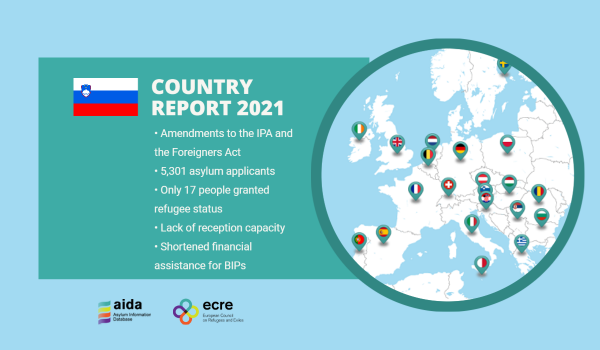 The updated AIDA Country Report on Slovenia provides a detailed overview on legislative and practice-related developments in asylum procedures, reception conditions, detention of asylum seekers and content of international protection in 2021.

At the end of March 2021, important legislative changes were adopted relating to the International Protection Act (IPA) and the Foreigners Act. The amendments to the IPA and the Foreigners Act, that officially came into force on 9 November 2021, lower protection standards for asylum seekers and allow borders closure in the case of a “complex crisis” on the field of migration, preventing most individuals from lodging an application for international protection in Slovenia. During the legislative procedure, NGOs had opposed the proposed amendments; once they were adopted, they urged different institutions to submit them to the Constitutional Court for constitutional review.

Throughout the year, the number of asylum seekers increased reaching 5,301 applicants; access to and length of the asylum procedure continued to be among the main shortcomings of the Slovenian asylum system. Only 17 persons were granted international protection in 2021, the lowest number since 2008. The rejection rate at first instance reached 80%, while 565 applications were still pending at the end of the year.

Due to the increase in arrivals and the mandatory COVID-19 quarantine period, the accommodation centre in Logatec was reorganized into a pre-reception centre. Asylum seekers had to wait up to 20 days in the pre-reception area of the Asylum Home of Logatec to lodge their applications. During this time, they did not have access to other services or material conditions, since they do not qualify as asylum seekers until they lodge the application. Due to a lack of capacity, some were accommodated in containers during their quarantine period. Additional problems were reported regarding reception for unaccompanied minors. As no systematic solution was found to grant them accommodation, throughout the year unaccompanied migrant children were still detained in the Foreigners Centre, while unaccompanied children seeking asylum were accommodated in the Student Dormitory Postojna or in the Asylum Home.

Among issues originating from the entry into force of the IPA amendments in November 2021, was the fact that the freedom of movement of all asylum seekers was limited, in the sense that they can move freely inside the municipality where they are accommodated but must ask for permission to leave it. Additionally, the Migration Directorate began to detain asylum seekers – among which also families – in the Foreigners Centre, either because their application was being processed in the Dublin procedure, or as they had violated public order. Alternatives to detention are still not available in Slovenia.

The amendments of the IPA also limited the rights of beneficiaries of international protection while in the integration process. The duration of financial assistance for accommodation was shortened from 18 months to 1 year. Access to all rights, including accommodation, is conditioned by signing the integration contract. In addition, beneficiaries who do not pass a Slovenian language exam at CEFR Level A1 within 1 year of obtaining international protection can be removed from the unemployment register, which is the predisposition for financial assistance. In practice, due to the lack of Slovenian language courses and the limited number of exam terms, applicants face significant difficulties in passing the exam.