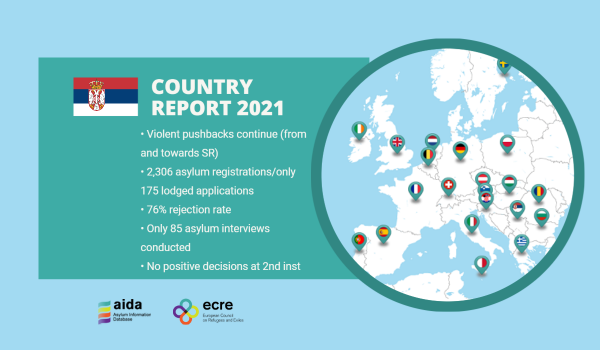 The updated AIDA Country Report on Serbia provides a detailed overview on legislative and practice-related developments in asylum procedures, reception conditions, detention of asylum seekers and content of international protection in 2021.

In 2021, push-backs practices and other forms of collective expulsion continued, especially on the southern border with North Macedonia. Expulsions were very often of violent nature and included different instances of ill-treatment such as slaps, kicks, hits with rubber truncheons, insults, and threats. At the same time, wide-spread push-backs towards Serbia have been documented along the green border with Bosnia, Croatia, Hungary and Romania, where refugees and asylum seekers are systematically denied access to the territory and the asylum procedure, and are often subjected to various forms of ill-treatment, some of which may amount to torture. In 2021, according to various reports, a total of 71,470 persons were pushed back from Hungary to Serbia, 28,737 from Romania to Serbia, and at least 1,000 persons from Croatia to Serbia. Persons in need of international protection still faced significant problems in accessing asylum procedure also at the airport Nikola Tesla, where they are deprived of their liberty in an arbitrary manner and in conditions which could amount to inhumane and degrading treatment.

The number of persons issued with a registration certificate for their asylum application significantly dropped from around 12,900 in 2019 to 2,306 in 2021. Out of the total number of registered persons, only 175 officially lodged an asylum application. This figure shows that Serbia is still considered a transit country, but could be also due to the numerous obstacle that persons in need of international protection face in registering and lodging their application for international protection. Throughout the year, the Asylum Office delivered only 114 decisions regarding 156 asylum seekers. Similarly to previous years, a high number of applicants absconded before the first instance decision on their case was rendered. The rejection rate was very significant, representing of 76% of the total of decisions.

For what concerned reception capacity, according to the authorities it reached 5,655 places at the end 2021. In practice, however, Serbia can only host between 3,000 and 3,500 migrants, asylum seekers and refugees in order to comply with applicable housing and human rights standards. Throughout the year, several thousand refugees, asylum seekers and migrants were accommodated in tents or collective premises with dozens of bunk beds in unhygienic conditions and with limited privacy and insufficient number of sanitary facilities. As to detention practices, it is still safe to claim that Serbian authorities rarely detain asylum seekers. Nevertheless, people who may be in need for international protection but are not officially recognised as asylum seekers can be detained under the Foreigners Act during the removal procedure. The Ministry of Interior does not publish statistics on detained foreigners nor is it willing to provide them to CSOs; detained individuals are also not provided any legal assistance in the forcible removal procedure.

The integration of refugees and asylum seekers still largely depends on the assistance of CSOs, despite the clear mandate of the Commissariat for Refugees and Migration to provide social, economic and cultural assistance. There is no precise data on how many persons granted asylum remained in Serbia, but it is reasonable to assume that it is less than 100. This can be attributed to the lack of prospect to access the labour market. Access to education for all children seeking or granted asylum in guaranteed, and first 4 refugees enrolled into universities in 2021.