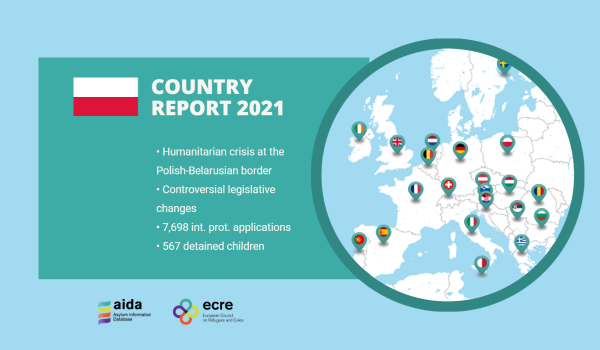 The updated AIDA Country Report on Poland provides a detailed overview on legislative and practice-related developments in asylum procedures, reception conditions, detention of asylum seekers and content of international protection in 2021.

Access to the Polish territory for asylum seekers was the most significant challenge related to asylum in 2021. While asylum seekers being denied entry has been a persistent problem for many years, the number of foreign nationals wanting to cross the Polish-Belarusian border increased significantly in mid-2021. In response, Poland militarized the border, prevented access to international protection procedure and blocked access to the border zone by introducing the emergency state. As a result, foreign nationals were left stranded at the border for months and those who managed to get through were pushed back to the Belarusian side. The situation quickly became a humanitarian crisis, with people found in the woods suffering from exhaustion and hypothermia. Approximately 21 persons were found dead by mid-December 2021. The situation at the Polish-Belarusian border gave rise to controversial legislative changes, which allow for an expulsion in a simplified procedure and restrict the possibility to apply for international protection for persons intercepted in the border area.

In 2021, a total of 7,698 applications for international protection were lodged, thus marking a significant increase compared to 2020, when only 2,803 applications were lodged, mostly due to the pandemic. The recognition rate at first instance increased significantly, with more than a half of applicants whose cases were examined in 2021 receiving refugee status or subsidiary protection. This was, however, significantly influenced by the evacuation of nearly 1,100 Afghans following the Taliban takeover of the country, who were later granted refugee status. The vast majority of applicants granted subsidiary protection were Belarusians. At second instance instead, the chances of success of appeals remained very low.

Due to situation at the Polish-Belarusian border, two new detention centres were opened, and the number of available detention places increased significantly going from 959 in 2020 to 2,308 by the end of 2021. Detention of children without proper best interest assessment was a cause of particular concern throughout the year, when the total number of detained children reached 567. Another particular issue registered for what concerned detention was the lack of information provided to detained migrants regarding their right to legal assistance and to file an appeal.

Access to housing was one of the major issues reported both by asylum seekers and beneficiaries of international protection, some of whom were left homeless. In less extreme cases, inadequate quality of accommodation results in slowing down the integration process and negatively affected their physical and mental health. Beneficiaries of protection also faced significant problems regarding access to the labour market, often connected to their limited opportunities of learning the local language.