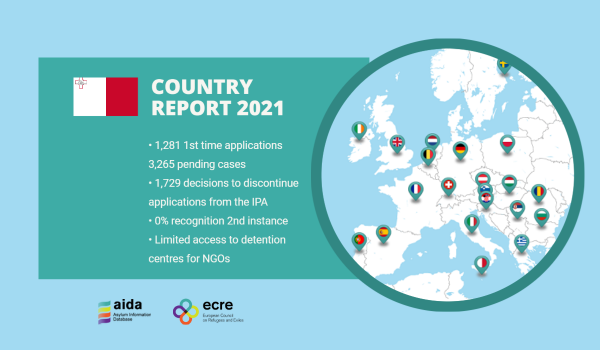 The updated AIDA Country Report on Malta provides a detailed overview on legislative and practice-related developments in asylum procedures, reception conditions, detention of asylum seekers and content of international protection in 2021.

Throughout 2021, the Armed Forces of Malta continued to drastically decreased rescues at sea, and NGOs reported multiple pushbacks incidents. Additionally, the Maltese Government continued to deny disembarkation to individuals rescued at sea. For what concerned the asylum procedure, the International Protection Agency (IPA) issued 691 first instance decisions in 2021, the vast majority of which were rejected as manifestly unfounded or inadmissible and thus channelled through the accelerated procedure with no possibility to appeal. The Agency also significantly reduced its backlog by massively discontinuing applications as implicitly withdrawn and prioritising manifestly unfounded cases. The IPA continued to systematize the use of the accelerated procedure for all asylum seekers coming from countries of origin listed as safe and started to extend the use of the procedure to asylum seekers coming from countries where returns were deemed feasible, the lack of an effective remedy in this procedure thus benefiting the Government’s policy geared towards fast returns.

Life for asylum seekers in open reception centres continued to be challenging, even if some improvements were registered in terms of renovations carried out. Moreover, despite an occupancy rate close to 26% at the end of the year – an historical low for Malta – the policy of evicting non-vulnerable asylum seekers after 6 months from their access to the centres continued to be applied rigorously. The number of  settlements created by evicted asylum seekers  continued to grow as a result, as many were unable to afford housing. This situation worsened significantly since the emergence of the new work policy which forbids access to the labour market to asylum seekers hailing from safe countries of origin for the first 9 months after they registered their asylum application. As a result, these individuals are evicted from open centres before being legally able to work and sustain themselves.

All asylum seekers, including individuals claiming to be minors, continued to be systematically subjected to de facto detention upon arrival, either as a measure of quarantine against COVID-19 or on the basis of the Prevention of Disease Ordinance. Only families and young children were excluded from this policy.

Conditions in detention centres remained an issue in 2021, despite two reports, published by the Council of Europe and the United Nations respectively, denouncing the alarming situation of such facilities. Access to the living quarters of detention centres is currently forbidden to NGOs and lawyers, which made it difficult to provide detailed information on detention conditions; regardless, detainees presented complaints regarding the substandard living arrangements in most blocks of the two major detention centres of the country. Challenging the detention of asylum seekers also remained particularly difficult, due to the fact that the main remedy foreseen by the law, appealing to the, is considered by lawyers and NGOs assisting migrants to be mostly ineffective due to the lack of independence of the members of the Immigration Appeals Board and their lack of knowledge in the relevant legal framework. Moreover, the restrictions faced by lawyers and NGOs in accessing the centres resulted in significant difficulties in providing legal services to detainees.