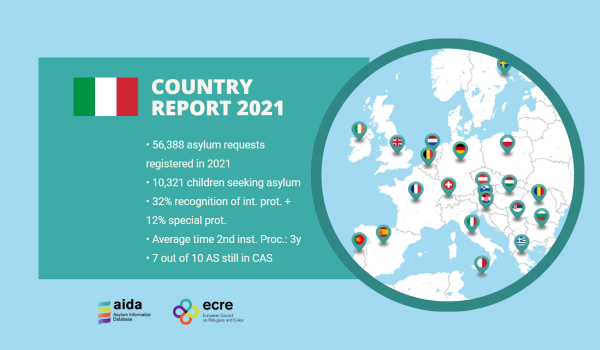 The updated AIDA Country Report on Italy provides a detailed overview on legislative and practice-related developments in asylum procedures, reception conditions, detention of asylum seekers and content of international protection in 2021.

In 2021 In 2021, 67,477 persons disembarked in Italy,  almost doubling the number of arrivals of 2020 (34,154) and representing an even more relevant increase when compared to 2019, when a total of 11,471 people reached the country. The main nationality of people disembarked remained Tunisian, who were 15,671 in total. Among the people reaching Italy by sea, over 31,500 came from Libya, more than 20,000 from Tunisia, 13,000 from Turkey and 1,500 from Algeria. At least 32,425 persons, in 2021, were returned to Libya throughout 2021, and over 3,000 were returned in the first three months of 2022. Italy continued to play a role in supporting indirect push-backs, by providing the Libyan authorities with the means and technologies to improve tracing at sea. For the first time, however, a private boat’s (Asso 28) captain was sentenced to prison for returning migrants to Libya.

Problems continued to be signalled for what concerned access to the asylum procedure, both at the borders and in the country’s main cities. Despite said issues, a total of 56,388 asylum requests were registered in 2021, almost three times than the 21,000 registered in 2020. The number of children seeking asylum also more than doubled if compared to the previous year. The main countries of origin of asylum applicants were Pakistan, Bangladesh, Tunisia, Afghanistan and Nigeria. Out of the 52,987 first instance decisions issued throughout the year, an increase in the recognition of protection statuses was noticed. Overall, 44% of applicants received a protection status at first instance: of these, 32% were recognised one form of international protection, while 12% obtained special protection status. While similar data on second instance decisions were not made available, the average time for an appeal to be processed reached 3 years in 2021.

The situation of Dublin returnees remained uncertain. As an example, in December 2021 an Afghan citizen, evacuated from Afghanistan by the Italian authorities, who was returned to Italy from France under the Dublin Regulation, was notified of an expulsion order once arrived by flight at Venice airport and immediately moved to a CPR. Meanwhile, several Courts suspended Dublin transfers pending the CJEU’s preliminary ruling on the scope of the sovereignty clause and its application in cases where the non-refoulement principle could be violated.

Some criminal investigations against NGOs working in favour of asylum seekers were closed during the year. This was the case of the investigation for aiding and abetting illegal immigration against Linea d’Ombra, operating in Trieste, accused of hosting and helping a family of asylum seekers who came from the border with Slovenia to reach Milan,  and the one started against the activists of Rete Solidale, NGO operating in Pordenone, together with 9 asylum seekers, accused to have occupied a private parking to help about 70 asylum seekers in need of accommodation, both of which were closed in November. The same happened, in January 2022, for Mar Jonio’s tugboat accused of aiding and abetting illegal immigration who rescued and transported 30 migrants in 2019,  and for the NGO Baobab  accused of abetting irregular immigration for the help provided to 9 asylum seekers in buying train tickets to reach Ventimiglia, charges that were considered unfounded by the preliminary hearing judge  of the Criminal Court of Rome in a ruling issued at the start of May 2022. However,  criminal proceeding against 4 Eritreans accused of having helped other Eritreans to reach Ventimiglia and the tugboat Mar Jonio, accused for taking refugees on board from the Etienne oil tanker and for having accepted a money donation for it are still pending.

Despite the 2020 reform, the accommodation system in Italy remains mainly based on extraordinary centres. Significantly, by the end of 2021, 7 out of 10 asylum seekers were accommodated in CAS facilities. For what concerned detention measures, by the end of the year four hotspots were still operating in Taranto Lampedusa, Pozzallo, and Messina). ASGI reported many criticalities at the “new border” of Pantelleria, where landed migrants are also channelled in hotspot-like procedures, and concerns were expressed regarding the lack of specific measures destined to address gender issues in the hotspot of Lampedusa.