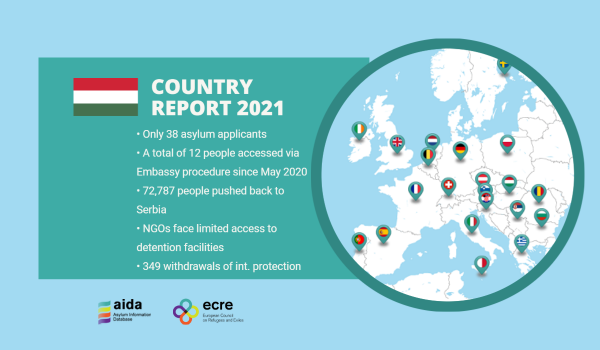 The updated AIDA Country Report on Hungary provides a detailed overview on legislative and practice-related developments in asylum procedures, reception conditions, detention of asylum seekers and content of international protection in 2021.

Figures from 2021 reveal how access to the asylum procedure was severely hindered after the introduction of a new asylum system in May 2020. Throughout the year, only 38 people managed to apply for asylum in Hungary. Altogether, only 12 persons arrived via Embassy procedure since this system was introduced. Those whose intent submitted at the Embassy was rejected, were simply notified by email that they were not granted permission to enter Hungary. Despite several domestic courts condemning such practice, so far national asylum authorities refused to carry out a new procedure and to detail its decision.

Asylum seekers who do not fall under the limited exceptions allowing them to make an asylum application in Hungary, but nevertheless tried to apply for asylum at the NDGAP (including those legally staying) were issued a refusal decision on the grounds that according to the current legislative framework, they should submit an intent at the Hungarian Embassy prior to being allowed to apply for asylum in Hungary. In case of an Afghan applicant whose residence permit expired, the refusal decision was followed by a pushback to Serbia, a country where he had never sojourned before. The number of reported pushbacks to Serbia carried out by Hungarian authorities was extremely high: 72,787 people were subjected to such practices, almost 3 times more than in 2020, despite CJEU and ECtHR’s judgements condemning them.

Since 1 January 2022 a foreigner shall not be granted subsidiary protection/protection is withdrawn if there are reasonable grounds for believing that, prior to a person’s admission by Hungary, he or she has committed an offence in the country of origin punishable in Hungary by a term of imprisonment of up to three years or more and there are reasonable grounds for believing that the applicant left his or her country of origin only in order to avoid the penalty for the offence. In 2021, the NDGAP initiated the withdrawal of international protection status of 237 persons and issued a final decision of withdrawal in the case of 349 persons in 2021, which is a huge increase compared to last year.

Due to the low number of asylum seekers registered in 2021, reception facilities ran below their capacities most part of the year. Afghan evacuees rescued by the Hungarian Defense Forces after the Taliban takeover were not registered as asylum seekers, but instead channelled into aliens policing procedure. Regardless, between September and November they were placed in the reception centres of Vámosszabadi and Balassagyarmat, which resulted in the temporary overcrowding of both facilities. At the end of 2021 however, Vámosszabadi was empty, whereas Balassagyarmat hosted only five asylum seekers.

Since June 2016, the Hungarian state has completely withdrawn integration services provided to beneficiaries of international protection, thus leaving recognised refugees and beneficiaries of subsidiary protection in destitution and homelessness. The capacity of non-governmental and church-based organisations to provide the necessary integration services such as housing, assistance with employment, Hungarian language classes or family reunification is seriously limited leaving many without any help.