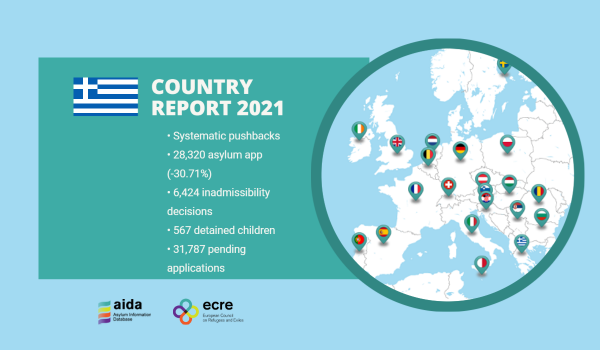 The updated AIDA Country Report on Greece provides a detailed overview on legislative and practice-related developments in asylum procedures, reception conditions, detention of asylum seekers and content of international protection in 2021.

In 2021, a total of 9,157 refugees and migrants arrived in Greece. This marks a decrease of 31.7% compared to 2020 (15,696).  Out of them, 4,331 persons arrived by sea (compared to 9,714 in 2020); most of new arrivals came from Afghanistan (20.2%), Somalia (19.9%) and Palestine (15.3%). Approximately half were women (18.8%) and children (28.5%), while 52.7% were adult men. Moreover, 4,826 persons arrived in Greece through the Greek-Turkish land border of Evros in 2021. The registered number entries in 2021 may however under-represent the number of people actually attempting to access Greek territory, given that cases of alleged pushbacks at the Greek-Turkish land borders and at the Aegean Sea have been systematically reported in 2021. Several reports indicate that they have become a “standard practice”, including violent border practices, arbitrary detention and even deaths at borders. The Greek Government remains opposed to the development of an independent border monitoring mechanism and no effective investigation has been conducted up until today on repeated push backs allegations.

Overall, the recognition rate for international protection at first instance was of 60%, when factoring in only decisions on the merits. However, a significant number of applicants had not the possibility to see their application examined on the merits, as they were examined under the safe third country concept, following the issuance of the Joint Ministerial Decision issued on 7 June 2021, that designated Turkey as a safe third country for applicants from Syria, Afghanistan, Somalia, Pakistan, Bangladesh. Important to note is that three of the five nationalities mentioned in the JMD are those who were most often recognised as beneficiaries of international protection in Greece previous to the issuance of the decision. The application of the JMD resulted in a sharp increase in inadmissibility decisions based on the “safe third country” concept, rising from 2,839 in 2020 to 6,424 in 2021. Additionally, access to asylum on the mainland continued to be a serious matter of concern throughout 2021, mostly due to the ineffectiveness of the access to the procedure through Skype.

For what concerned reception, temporary camps on the mainland, initially created as emergency accommodation facilities, continued to operate throughout 2021. In December 2021, 15,793 persons – most of whom were children (39%) and women (24%) – were accommodated in such camps.  Additionally, 12,447 people, of whom nearly half were children, were accommodated under the ESTIA II accommodation scheme in December 2021. Despite the decrease in the number of applications, reception conditions remained substandard in different locations across the country.

The total number of third-country nationals detained in Pre-removal Detention Facilities (PRDFs) during 2021 was 12,020, out of whom 6,447 were asylum seekers. At the end of 2021, there were 2,715 persons in administrative detention, of whom 1,344 asylum seekers. Greek authorities continue to impose detention even in cases where removal is not feasible. This is particularly noticeable for applicants that rejected based on the safe third country concept in Turkey, as all removals to the country have been suspended since March 2020. In many cases, the detention conditions in pre-removal centres fail to meet adequate standards, and vulnerable groups are detained in practice, without a proper identification of vulnerability and individualised assessment prior to the issuance of a detention order.