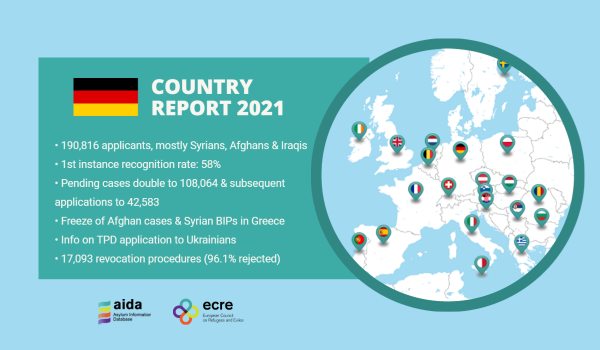 The updated AIDA Country Report on Germany tracks recent developments in the area of asylum procedures, reception conditions, detention of asylum seekers and content of international protection in 2021. The year 2021 was marked by the continued impact of COVID-19 and the Federal elections in September which resulted in the formation of a government between the Social Democratic Party (SPD), the Green Party and the Liberal Free Democrats (FDP). No major legislative changes occurred but the new coalition presented different measures and reforms, mostly positive, in the area of asylum and international protection which are summarised at the beginning of the AIDA report.

Following the Taliban takeover, Afghan nationals who had worked for German authorities, the military and “especially endangered persons” were able to access Germany via an emergency visa based on Section 14 and 22 Residence Act. As of 10 December 2021, a total of 28,053 permissions for admission from abroad had been issued to Afghan nationals, but only 8,014 of them actually reached Germany. Regarding Afghan asylum seekers, the BAMF decided to de-prioritise their cases due to the uncertain situation in the country, except for cases in which international protection could be granted according to the guidelines in place or where the situation in Afghanistan was irrelevant for the decision. The government further clarified that decisions continue to be taken on an individual, case-by-case basis. Regarding Syrians holding a protection status in Greece, the Federal Constitutional Court set out standards that have to be met by the authorities to be able to send them back to Greece. In 2021, two Higher Federal Administrative Courts thus declared removals to Greece of beneficiaries of protection to be unlawful due to the dire humanitarian situation in the country. In July 2021, the German and Greek governments signed a memorandum of understanding aiming to improve integration prospects in Greece; and the BAMF announced in March 2022 that it would start processing the 39,000 pending cases accordingly.

Germany was further affected by the situation at the Belarussian border, which resulted in 11,228 irregular crossings at the German–Polish border in 2021, and by the situation in Ukraine. The Temporary Protection Directive has been activated in Germany and a letter was sent by the Federal Ministry of the Interior on 14 March 2022 to the Federal States to outline the conditions for temporary protection in Germany. Those who benefit from it have access to the labour market, social benefits and integration courses. Residence permits are valid up until 4 March 2024.

Conditions in reception centres and detention facilities continued to be largely affected by the COVID-19 pandemic – i.e. quarantine periods, suspended activities, difficulties in accessing service providers or NGOs and limited integration prospects. Germany further continues to initiate a high number of revocation procedures (117,093 revocation procedures in 2021) but 96.1% of them were rejected. Access to family reunification also remains limited due to lengthy procedures at embassies and the quota of 1,000 persons per month applicable to beneficiaries of subsidiary protection. Only 5,934 visas were issued for family members of beneficiaries of subsidiary protection in 2021, and thus only half of the foreseen quota was used.