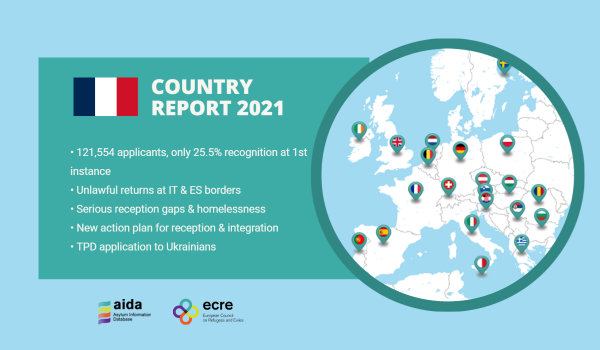 The updated AIDA country report on France documents the most recent developments in the national asylum system, i.e. legislative and practice-related changes in the asylum procedure, reception conditions, detention and content of international protection.

In 2021, a total of 121,554 persons applied for international protection, out of which 104,577 first time applicants. The majority came from Afghanistan, followed by nationals from the Ivory Coast, Bangladesh, Guinea and Turkey. The determining authority, the OFPRA, issued a total of 139,513 first instance decisions and the recognition rate stood at 25.5 % at first instance, while the backlog of pending cases reached a total of 49,500 cases, down from 84 000 in 2020. This decrease is mostly due to the significant drop in asylum applications in 2020 and to an increase in staffing at the OFPRA since September 2020.

Reports of people being refused entry at the Italian and Spanish borders without their protection needs being assessed persisted in 2021. To investigate violations at borders, a parliamentary commission on migration was set up and published a report in November 2021 recalling that “the violations of rights at borders have been abundantly documented and denounced” and that “it’s time to put an end to it”. Intensified border controls in recent years have further led to new forms of detention, including de facto detention in police stations at the Italian border which cannot be accessed by civil society organisations. In a decision of 23 April 2021, the French Council of State considered that denying access to NGOs in detention areas at the border was illegal, but refused to close these places of detention.

The lack of reception capacity in France remains a serious matter of concern, resulting in homelessness and serious human rights violations. At the end of 2021, only 56% of asylum seekers eligible to material reception conditions were accommodated. Informal settlements and camps are regularly dismantled in big cities or in the North of France (e.g. Calais or Grande Synthe). A ‘national plan for the reception of asylum seekers and the integration of refugees for 2021-2023’ was published with the aim to dispatch asylum seekers from Paris to other regions. A total of 16,000 asylum seekers, 40% of whom under the Dublin procedure, were dispatched across France in 2021, but this had a negative impact in certain regions due to a lack of adequate reception capacity at local level. The situation in Mayotte remains particularly worrying and the Council of State ruled in March 2021 that the authorities had seriously breached the right to asylum by failing to provide adequate material reception conditions.

As regards the situation in Ukraine, France transposed the Temporary Protection Directive (TPD) in its national legal framework to ensure an immediate protection to people fleeing Ukraine. Two inerministerial instructions have been published to provide guidance on the implementation of the TPD and to organise accommodation in different reception phases. On 1 April 2022, a total of 36,000 displaced persons from Ukraine had entered French territory.