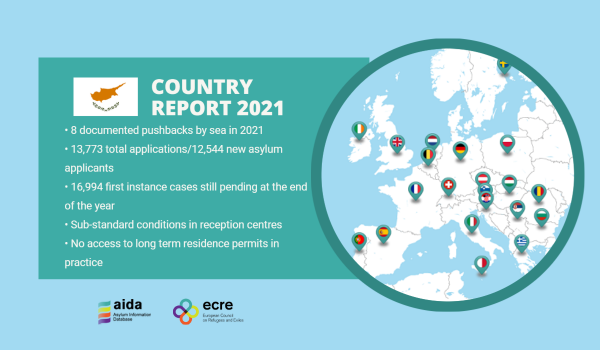 The updated AIDA Country Report on Cyprus provides a detailed overview on legislative and practice-related developments in asylum procedures, reception conditions, detention of asylum seekers and content of international protection in 2021.

Following the first documented pushbacks by Cypriot authorities in 2020, reports illustrated a continuance of the practice in 2021. Eight such incidents were registered throughout the year, mainly involving Syrian, Lebanese and Palestinian nationals who had departed from Turkey or Lebanon. Besides pushbacks at sea, in May 2021, three Cameroonians approached the RoC police at the Ledra Palace crossing point to seek asylum and were pushed back to the Buffer Zone, were they remained in tents for a period of 6 months. A similar incident involved an 18-year-old Nigerian woman, who was subjected to the same treatment in December.

Despite the attempts made by the government to enhance border surveillance, arrivals on the territory – mostly through crossings of the ‘green line’ – increased throughout the year. A similar rise was registered in the number of asylum applications presented, which reached a total of 13,773 (out of which 12,544 were new applications), more than double the figure registered in 2020. This rendered Cyprus the EU Member State with the highest number of asylum seekers per capita. The backlog of pending applications, while slightly reduced when compared to the previous year, also remains extremely high, with 16,994 cases still pending in December 2021.

Gaps remain regarding the timely identification and response to the needs of vulnerable individuals in particular for what concerns the protection of minors, particularly in the First Reception Centre of Pournara. Children are not granted adequate guardianship, and are consequently exposed to serious risks, such as trafficking for sexual or labour exploitation. This is particularly worrying in light of an increasing number of asylum-seeking children arriving in Cyprus over the past year, either together with family members or unaccompanied.

The conditions that asylum seekers face when accessing the reception system remain below adequate levels. Reception centres are overcrowded and in need of infrastructural renovation; sanitation and hygiene are below standard, and no sufficient safeguards against sexual and gender-based violence for children and single women are in place. The majority of asylum seekers are hosted in the community instead of reception centres, and often live in extremely impoverished conditions. However, some improvements regarding access to the labour market for asylum seekers should be noted, as the procedure requited to hire them was significantly simplified. Even so, further monitoring will be required with regards to working conditions and respect of labour rights.

The treatment by the authorities of beneficiaries of protection in the country also gave rise to various concerns. First of all, the lack of integration opportunities remains a serious problem in the national asylum system. A new integration plan, which will lead to the adoption of a multi-year integration strategy, has to be launched, but the approval by the Minister of Interior is still pending. Moreover, naturalisation has become more difficult to access for the majority of refugees, including for those who have been living in Cyprus for well over 10 years, were born in the country or arrived at a very young age. At the same time, family reunification remains a lengthy procedure for refugees, while beneficiaries of subsidiary protection – among which 98% of the Syrians present in the country – are not eligible for the procedure, and often resort to irregular means to be reunited with members of their families.