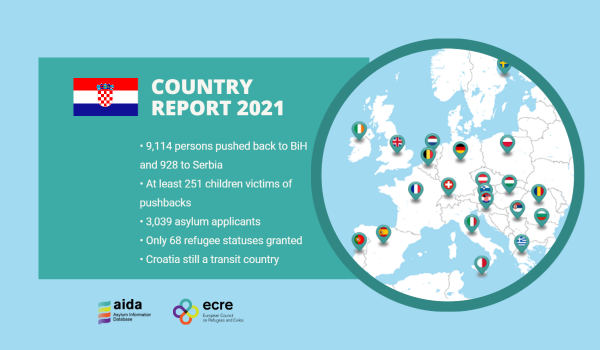 The updated AIDA Country Report on Croatia provides a detailed overview on legislative and practice-related developments in asylum procedures, reception conditions, detention of asylum seekers and content of international protection in 2021.

Access to the territory remained a serious matter of concern and was marked by violent incidents in 2021. According to the Danish Refugee Council (DRC), 9,114 persons were pushed back from Croatia to Bosnia and Herzegovina (BiH) throughout the year, and 928 persons from Croatia to Serbia according to UNHCR. This includes 251 children according to the Ombudsperson for children and other vulnerable groups. The CPT published its report on the ad-hoc visit to Croatia from 10 to 14 August 2020 in December 2021. The latter provides recommendations for an effective and independent border monitoring mechanism. An independent border monitoring mechanism was established in Croatia in the summer 2021, but its lack of independence and efficiency remains criticised by several stakeholders.

The number of applicants for international protection in 2021 increased significantly, from 1,932 in 2020 to 3,039 applicants in 2021. Although detailed statistics were not made available by national authorities, the recognition rate remained low, as only 68 refugee statuses were granted in the course of 2021. Croatia continues to be a transit country as the majority of applicants for international protection leave Croatia to other countries and abandon their cases, resulting in a suspension of their procedure in 75.35% of the cases.

A ruling on the application of the safe third country concept was issued by the Constitutional Court on the case of the family of Madina H. It concerned an Afghan girl who was killed by a passing train at the border between Croatia and Serbia in 2017. The Constitutional Court accepted the applicant’s allegations that during the procedure before the Ministry of Interior and administrative court proceedings, it was not established with sufficient certainty that Serbia is a safe European third country and that Croatia had failed to fulfil its procedural obligations under Article 3 of ECHR

An important development registered in 2021 regarded access to the Schengen area. In July 2021, the European Parliament (EP) adopted a resolution stressing that Croatia has met all the conditions for its accession to Schengen, but also urged Croatia to address shortcomings regarding the training of border staff and the respect of fundamental rights at borders. On 9 December 2021, EU ministers of Interior unanimously approved the Conclusions on the fulfilment of the necessary conditions for the application of the Schengen acquis by the Republic of Croatia.

For what concerned reception, access of persons not necessary to the functioning of Reception Centers for Applicants of International Protection was limited from March 2020 until the end of 2021 to prevent the spread of COVID-19. Throughout the year, a total of 2,797 applicants for international protection were subject to self-isolation and a total of 420 people were tested, of which 48 were COVID positive.

Similarly to previous years, beneficiaries of international protection face significant challenges in exercising their rights. The most important issues still relate to the language barrier as well as the access to health care, employment, education and housing. Although the previous Integration Action Plan expired at the end of 2019, a new Integration Action Plan was still not adopted in 2021.