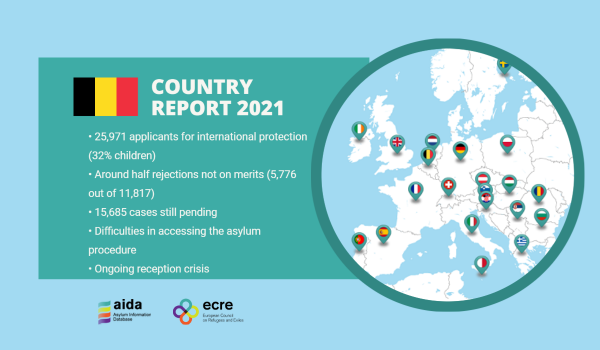 The updated AIDA Country Report on Belgium provides a detailed overview on legislative and practice-related developments in asylum procedures, reception conditions, detention of asylum seekers and content of international protection in 2021.

In 2021, a total of 25,971 applications for international protection were lodged in the country. Throughout 2021, the CGRS granted the refugee status to 9,222 persons and subsidiary protection status to 871 persons, bringing the total recognition rate at first instance to 43.5%. As in previous years, the low recognition rate is partly attributable to the high number of inadmissibility decisions (5,169 out of 11,817 total rejections) taken either in the case of subsequent applications or towards beneficiaries of international protection in another Member State. When considering only decisions on the merits are considered, the recognition rate rises to 58.3%.

Due to the critical situation of the reception system, the government also launched, on 24 January 2022, a ‘five-point action plan’ to counter the ‘growing problem of asylum seekers crossing into Belgium’. One of the pillars of this action plan consists in giving priority to ‘first time applicants’, who have not yet applied for or/and received asylum in another Member State, in case of shortage of reception places. From such date, applicants for whom, at the moment of registering their asylum application, a Eurodac hit indicates they have already applied for or received international protection in another country, are denied access to the reception network and requested to contact Fedasil to be included in a waiting list. Between 24 January and 25 March, 515 persons were denied access to the reception network on these grounds. During the same period, 386 registered for the waiting list. On the other hand, building on a wave of solidarity among Belgian citizens after the outbreak of war in Ukraine, the Secretary of State launched a campaign called “#plekvrij” to look for emergency housing for Ukrainian citizens. Local governments and individual citizens can indicate if they have extra housing places for Ukrainian citizens. On 4 March 2022, the number of places offered had reached over 15,000.

For what concerns integration policies – which are designed and implemented at the regional level, a new Flemish decree on civic integration was introduced in 2021. Among the main changes from the previous decree is the fact that, from 1 January 2022, the integration trajectory will no longer be accessible for applicants for international protection. Taking part in the trajectory, which includes a course on social orientation focusing on life, work, norms and values in Belgium, Dutch language courses and individual guidance, will remain compulsory for beneficiaries of international protection. The new decree also establishes that participants will be obliged to register with employment services and, most relevantly, to pay fees that can reach up to 360 euros per person to access different parts of the trajectory. Exceptions are in any case foreseen for people with limited resources.