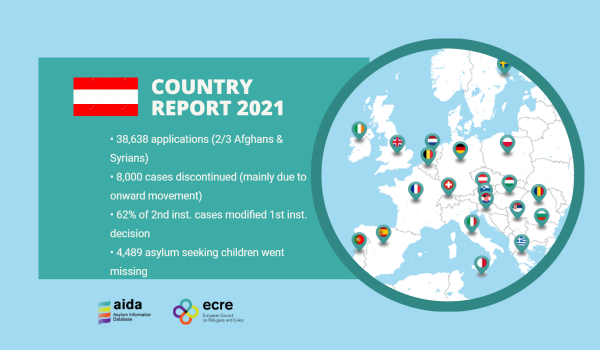 The updated AIDA Country Report on Austria provides a detailed overview on legislative and practice-related developments in asylum procedures, reception conditions, detention of asylum seekers and content of international protection in 2021.

Pushback allegations and summary returns at the southern border of Austria with Slovenia increased in 2021. Several cases have been brought to Court, leading to a landmark decision in July 2021 in which the Regional Administrative Court of Styria came to the conclusion that “‘summary returns („push-backs“) are partly applied as a method in Austria”. The decision also confirmed that asylum applications are “overheard”, i.e. applicants are not properly interviewed, and that certain police measures taken resulted in a degrading treatment of the applicants. In terms of applications, in 2021 Austria saw a 160% increase when compared to 2020, and after three years of record low numbers. Almost 2/3 of all applications were lodged by Syrians (15,796 applicants) and Afghans (8,641 applicants). It should be noted, however, that the number of asylum seekers receiving basic care remained at the same level as in previous years, thereby indicating that many asylum seekers likely move to other countries after lodging an application for international protection.

The removal of under aged children with their respective mothers to Georgia and Armenia in January 2021 caused a media uproar and numerous protests. The Ministry of Justice decided to introduce a commission of experts to assess the respect of the best interest of the child in asylum and removal procedures, which presented a report in July 2021 with several recommendations such as the importance to carry out a mandatory hearing of under age children in asylum procedures or providing guardians to unaccompanied minors at an earlier stage of the procedure. Protection of children in the asylum procedure seems to be a particular issue in the country: in 2021, 4,489 minors went missing after applying for asylum, which represents 78% of all applications of minors in 2021.

Due to the non-adjustment of reimbursement of costs for accommodation of asylum seekers by the federal state to the provinces, in 2021 the provinces did not take responsibility for applicants for international protection. As a result, reception centres were overcrowded and the BBU GmbH was forced to open all remaining facilities available. Due to the increase of applications and necessary COVID-19 measures, inadequate facilities such as garages and ware houses were also used to accommodate applicants. This created  an image of a high influx of applicants in the public eye, even though the numbers of beneficiaries of basic care remained stable over the last 2 years as many applicants moved onward to other countries.

An important development registered in 2021 regarded access to the labour market for asylum seekers. Since 2004, an internal decree of the Ministry of labour called “Bartenstein-Erlass” resulted in a practice whereby the authority would deny working permits to asylum seekers. The decree obliged the Ministry’s members in the ‘Regionalbeirat’, a committee that decides on whether working permits should be granted to certain group of foreigners, to vote against the granting of working permits for asylum seekers in any case except for harvest and tourism jobs. In a ground-breaking decision, the Constitutional Court ruled in July 2021 that the internal decree was unlawful as it should have been issued as a regulation and published accordingly. Following this decision, the Ministry decided that it would not introduce the same rule as a regulation, but stated that it will only grant working permits to asylum seekers if no other European citizen would be able to take the job. Overall, the ruling has facilitated the access to employment for asylum seekers.