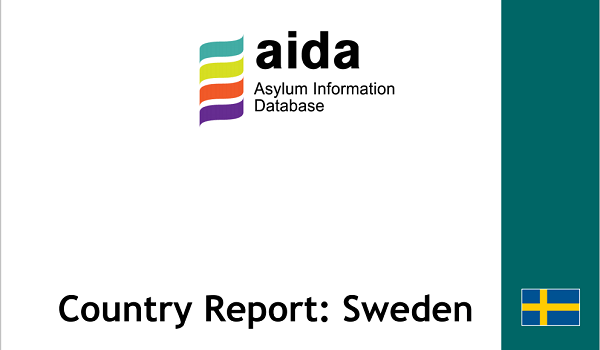 The updated AIDA Country Report on Sweden provides a detailed overview of the Swedish asylum system in 2020. It shows that COVID-19 resulted in a decrease of applicants for international protection in the asylum and reception system and reveals worrying developments for the rights of beneficiaries of international protection under Sweden’s future migration policy.

A total of 12,991 persons applied for international protection in 2020, thus marking a 41% decrease in applications compared to 21,984 in 2019. The possibility to apply for asylum and registration activities were maintained throughout the year, but the pandemic further had an impact on the asylum procedure such as postponing asylum interviews or conducting them via videoconferencing. The average length of the asylum procedure (i.e. for all different tracks) thus increased from 288 days in 2019 to a total of 302 days in 2020.

The Migration Agency decided on 50,012 applications for international protection in 2020 and the backlog of pending cases has been reduced by half from 14,890 in 2019 to 7,155 in 2020. Recognition rates dropped significantly compared to previous years. The overall recognition rate stood at 29% in 2020 compared to 39.7% in 2019. The recognition rate of Syrians decreased from 97% in 2019 to 76% in 2020 as a result of a change in the Migration Agency’s assessment of the situation in the country. Other nationalities affected by an important decrease of recognition rates include Eritreans, Somalians and Iranians. As regards children, the Convention on the Rights of the Child was finally implemented into Swedish law on 1 January 2020. An important ruling was also issued by the Migration Court of Appeal which concluded in December 2020 that an expulsion of a 14-year old child who was born and raised in Sweden is unproportionate in light of her connection and ties to the country.

Access to reception was not restricted during COVID-19 and there were no reported issues of homelessness or destitution during the asylum procedure. The total number of asylum seekers registered in the reception system decreased significantly from 40,312 in 2019 to 31,634 at the end of 2020. Similarly, the number of aliens being detained (i.e. which therefore does not refer strictly to asylum seekers) decreased by half from 4,144 in 2019 to 2,528 in 2020. This is due to health measures aiming at reducing the detention population and the impossibility to carry out expulsions due to travel restrictions. Nevertheless, civil society organisations and detainees highlighted several issues such as overcrowding, the impossibility to follow distancing rules between detainees, and shortcomings in cleaning and hygiene routines. The Migration Court of Appeal also issued several rulings reducing the scope of detention of asylum seekers, in line with the Reception Conditions Directive.

A Cross-party Committee of Inquiry presented its proposals for Sweden’s future migration policy. As opposed to the previous leniency of granting permanent residence permits to nearly all beneficiaries of international protection up until 2016, the new proposals are largely inspired by the Temporary law that has been in place since then. This includes rendering residence permits temporary (i.e. 3 years for refugees and 13 months for subsidiary protection status holders – extendable by two-year periods) as well as limiting the right to family reunification to core family members and introducing requirements on income and housing. However, the right to family reunification remains accessible both to refugees and beneficiaries of subsidiary protection.