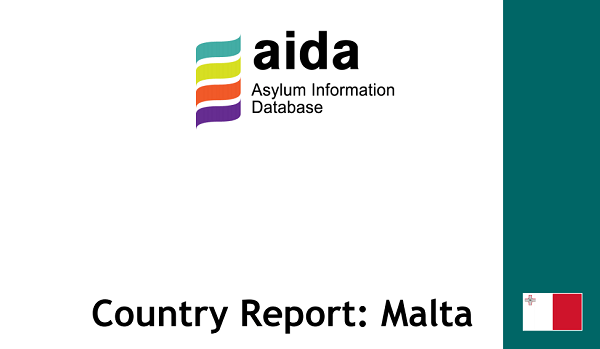 The updated AIDA Country Report on Malta provides a comprehensive overview of developments in the area of asylum procedures, reception conditions, detention of asylum seekers and content of international protection in 2020.

While the number of arrivals decreased from 3,400 in 2019 to 2,281 in 2020, search and rescue operations, shipwrecks and disembarkation continued to take place throughout the year. The violation of international and European law by the Maltese authorities as a result of illegal push-back practices to Libya; delays in rescue coordination and maritime detention was widely documented. Following the closure of borders in the context of COVID-19, Malta used private vessels outside territorial waters to detain over 400 persons rescued at sea from April to early June 2020. They were eventually allowed to disembark in Malta, where they were immediately placed in detention centres.

Malta further revised both its asylum law and policy in 2020. The new International Protection Act established an International Protection Agency (IPA) and an International Protection Appeals Tribunal (IPAT), replacing the previous Office of the Refugee Commissioner (RefCom) and the Refugee Appeals Board. Despite some positive steps (i.e. establishment of more formal procedures, revision of interview and assessment templates, codification of the temporary humanitarian protection status, additional safeguards for vulnerable applicants), the reform did not address some of the most important problems faced by asylum-seekers, namely the lack of effective remedy for applications processed under accelerated procedures and the lack of capacity of the (non-judicial) appeal body. The European Asylum Support Office (EASO) further increased its support by deploying 85 different experts across asylum and reception-related activities. A new Operational Plan for 2021 was signed in December 2020.

The reception system (open centres and other State-funded accommodation) had already reached its full capacity in 2019. As a result, newly arrived applicants in 2020 could not access reception centres and were systematically held in detention. Despite notable improvements – i.e. increased capacity of staff in the centres; development of information provision systems; new vulnerability assessment procedure; per diem allowance extended to asylum-seekers not living in the centres – the situation remained very chaotic due to the serious lack of space and resources, leading to deteriorated living conditions. The length of stay in the reception system was lowered from one year to six months, except for vulnerable groups. As a result, homelessness has been steadily on the rise. This situation has been exacerbated by COVID-19 which increased obstacles in securing housing and employment.

In 2020, all applicants rescued at sea and disembarked in Malta were automatically detained without any form of individualised assessment. As a result, vulnerable applicants, including minors, were also de facto detained upon arrival. Newly arrived asylum-seekers were detained under different legal regimes, largely depending on their nationality. Applicants coming from a country listed in the Act’s safe country of origin list were generally detained under the recast Reception Conditions Directive, without the possibility to effectively challenge their detention. Other applicants were detained under either national public health legislation or on a de facto basis. Both situations were declared illegal by Maltese courts. Applicants detained in the latter two scenarios were generally released when space was made available in the open reception centres, often after several months of arbitrary detention. Moreover, access to detention for NGOs was severely limited during COVID-19, thereby restricting applicants’ right to information and legal assistance. The Council of Europe Committee for the Prevention of Torture visited Malta in September 2020 and confirmed the systematic arbitrary detention of all asylum-seekers, without any access to information nor effective remedy, in conditions that were described as “institutional neglect”.