The new Hungarian parliament which will first assemble on 8 May is set to vote on draconian and regressive legislation which could arbitrarily restrict fundamental rights and freedoms of civil society. The proposed laws would further undermine and stigmatise organisations working to defend the human rights of migrants and refugees.

The treatment of our Hungarian members and partners and the laws being introduced to stifle civil society are deeply concerning. These will significantly limit their ability to carry out work independently, could ultimately lead to their closure and be damaging to the human rights of migrants and refugees. Such measures that penalise solidarity and support to migrants including asylum seekers and refugees should not be tolerated. 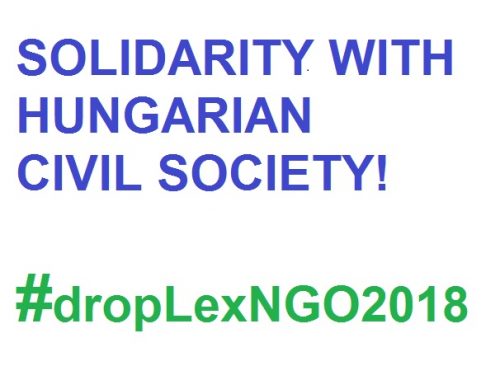 EU civil society actors have long warned against the criminalisation of NGOs, civil society and solidarity work with migrants, asylum seekers and refugees. These deliberate moves in Hungary to shrink civil society space have created an atmosphere where people working for NGOs are threatened and harassed and made afraid and insecure in their daily lives.

Hungary, as a member of the European Union, has a responsibility to protect fundamental rights and freedoms and to uphold the values of solidarity, human rights, democracy, equality, humanitarianism and the rule of law. The Hungarian government’s actions threaten these values and principles.

NGOs and civil society actors are an essential part of functioning democracies. These hostile moves have created mistrust, closed dialogue and will have lasting impact on the Hungarian civil society and the people they serve.

Each Member State has a responsibility to act in defense of democracy and civil society. We, the undersigned organisations therefore strongly call for the withdrawal of the Hungarian legislation proposed.

See the full statement and list of supporting organisations here.
You can also show your support and solidarity with Hungarian civil society using the hash tag #dropLexNGO2018